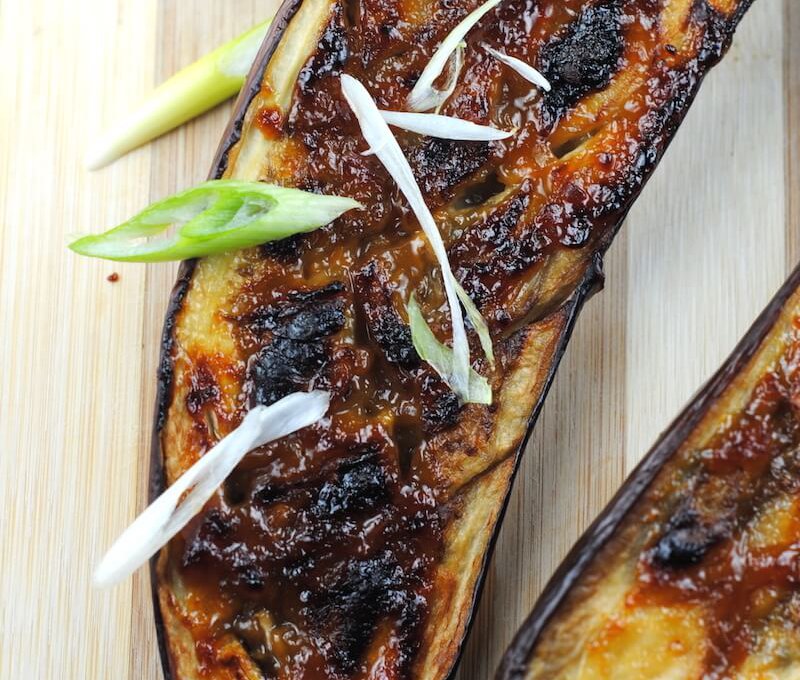 This recipe is a two-fer. First,  I’m going to show you how to make miso glazed eggplant and then I’m going to blow your mind by turning it in to an awesome dip! Are you ready?! This dish is called “nasu dengaku” in Japanese. It makes a great appetizer or side dish. It can also be the star of the show if you serve it with some rice.

I used Japanese eggplants, but if you can’t find them; just use any old eggplant. Long, skinny ones are better.

When you read the recipe, it will ask you to score the eggplant. Here is a video we filmed to show you the technique.

After you follow the steps and take it out of the oven, it should looks something like this… This is where you get to choose your own adventure. You can…

A) Stop right here and enjoy the beautifully glazed vegetable warm out of the oven.

B) Make a kick-ass eggplant dip!

I’m totally claiming this Japanese eggplant dip as an original Blenderist recipe. It came to me when I was munching on some lotus root chips. I thought it would be awesome to create a Japanese baba ganoush.

The method is simple. Just let the miso glazed eggplant cool and then scoop all the flesh in to a blender. Mix on medium speed until it’s the texture of baba ganoush. It is really great with the lotus root chips, recipe available here; but regular potato chips or rice crackers are cool too. It would also make a great sandwich spread. I would also put it in a dragon bowl. So many options!