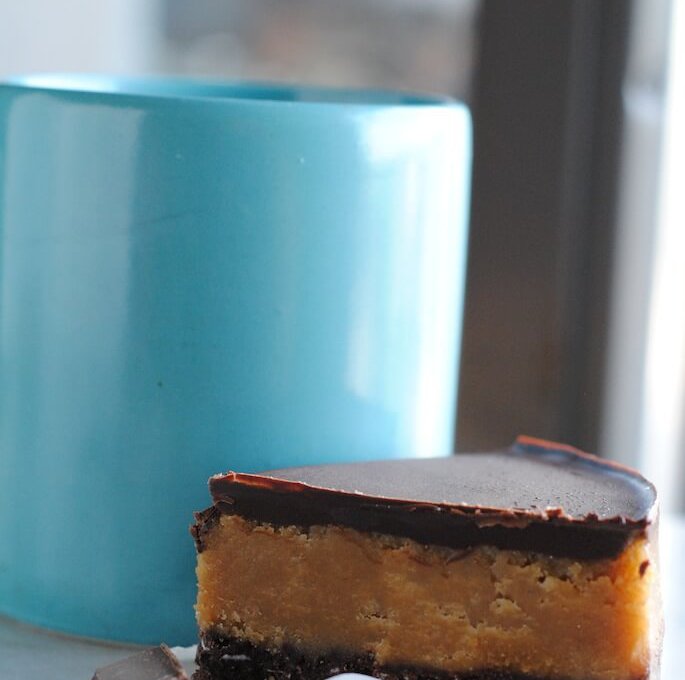 If you are not Canadian, the name of this recipe might leave you scratching your head. What the heck is a “Nanaimo”? Nanaimo is a city on Vancouver Island. My mom was born there. One of Nanaimo’s greatest claims to fame is the Nanaimo Bar. A traditional Nanaimo Bar is an intensely sweet treat, commonly sold in bakeries and coffee shops. My Nanaimo Bar Pie is an homage, but not a replica of the original recipe. My version has been adapted to be a healthier alternative; it is gluten-free, dairy-free, egg-free and primarily raw. A traditional Nanaimo Bar has three layers. The bottom layer is a coconut/chocolate/cookie mixture, the second layer is a vanilla custard icing, the top layer is a mixture of chocolate and butter. When I developed my recipe, I really wanted to stay true to the traditional textures. I think I’ve done a pretty good job! Since I use nuts to replace the icing/custard layer, mine is definitely nuttier. I chose macadamia nuts and cashews for their mild flavour. You could always use another type of nut, but traditional Nanaimo Bars are not nutty. Anyone who has had a Nanaimo Bar will tell you that a little goes a long way. The same can be said for my recipe. I used a 6-inch cake pan, and got 8 servings out of it. Although I used a round pan, I highly recommend using a square pan instead. This treat is easier to eat when its cut in to squares. Another word of advice, after you initially freeze it…let it stand at room temperature for an hour or so before you try to cut it. If it’s still frozen, the top will crack when you cut in to it.

As with many of my recipes, I advocate tasting as you go along. You can tweak the sweetness to meet your preference.

I am whipping up a vegan dessert cookbook. Join my newsletter for release details!

Success! Now check your email to confirm your subscription.